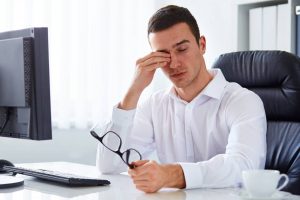 A chalazion is a swelling in the eyelid caused by inflammation of one of the small oil producing glands (meibomian glands) located in the upper and lower eyelids. A chalazion is sometimes called a stye, although technically a stye is an acute inflammation of a lash follicle rather than an eyelid gland. Anyone can develop a stye or chalazion, but people with other conditions such as blepharitis, history of previous chalazia, acne rosacea, seborrheic dermatitis and diabetes are more prone to developing either.

What are the common symptoms of a Chalazion?

Symptoms of chalazia include eyelid tenderness and redness as well as irritation and scratchiness in the eye. Tearing, crusting and mild light sensitivity can also occur. Many chalazia and styes resolve on their own without treatment and most can be cured with the application of warm compresses many times a day. About 30% will need surgical drainage in the office.

What is the treatment for a Chalazion?

Treatment with warm compresses should be started immediately upon first noticing a chalazion. A clean washcloth should be heated with very warm water and then held against the closed lid for five minutes or so and used to gently massage the lid. The washcloth will need to be rewarmed during this time since it is the heat that is doing most of the work. This should be done four to five times a day until resolution of the problem.

Antibiotics are rarely effective at curing a chalazion since the problem is within the lid structure. Some doctors choose to inject the lesion with steroids, but we have found this to be mostly ineffective. In the event that the chalazion does not resolve with hot compress use over two to three weeks, then surgical excision in the office setting may be necessary. This is a fairly quick, office-based procedure that involves some discomfort with the initial numbing process, but has a high cure rate. Uncooperative children may need general anesthesia for this procedure.

Chalazions usually respond well to treatment, although some people are prone to recurrences. If a chalazion recurs in the same place, especially in an older person, a biopsy might be performed to rule out a more serious problem. It is best not to wear eye makeup or contacts lenses until after the stye or chalazion clears.

How can I prevent the formation of a Chalazion?

Prevention of chalazions and styes involves addressing the underlying problems with the problematic glands. Daily use of warm compresses when washing one’s face in the morning and evening can be helpful. Supplementation with Omega-3 containing dietary fatty acid compounds may also aid in prevention by changing the chemical structure of the glands. We may suggest this as a way to prevent further occurrences of this recurring problem.

Saturday By Appointment Only